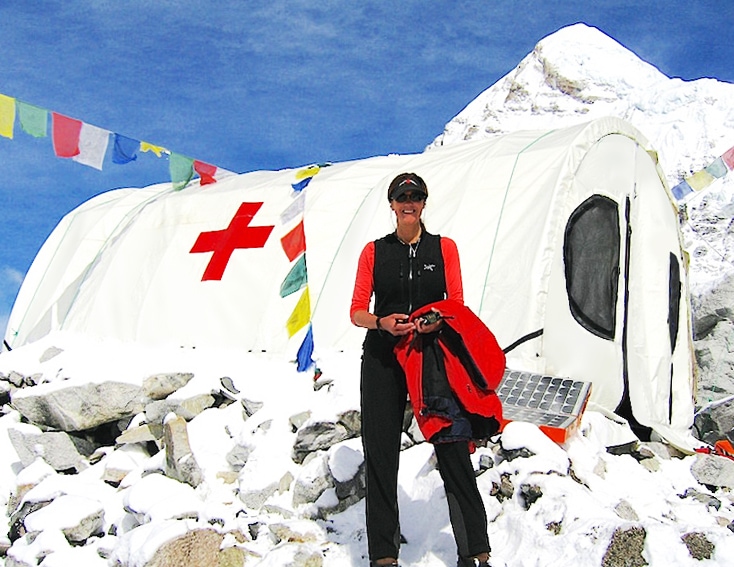 It takes a special kind of structure to deal with the harsh conditions found at more than 17,500 feet above sea level. For 12 climbing seasons, a 12’ x 20’ SQ Series fabric building from WeatherPort® did just that as a mobile field hospital at the Himalayan Rescue Association’s Mount Everest base camp.

“It’s really been such an amazing piece of equipment because it really has been so resilient,” said Dr. Luanne Freer, a member of the Everest ER team. “We’ve had snows that collapsed most of the tents in base camp and yet our clinic kept standing because it was designed and built so well. … I think it would have kept going if it hadn’t been smashed by the avalanche this year.”

At least 18 people died on Mount Everest in April 2015 when a powerful earthquake shook Nepal. The death toll would have been higher if not for the Everest Base Camp Medical Clinic’s sturdy construction.

“I think that our doctors would credit the (WeatherPort field hospital) with saving their lives, to be honest,” Dr. Freer said. “One of our doctors was in the tent with a patient and both of them thought that if they had been outside they would have been killed. … When you look at the pictures you can see the tent was pretty mangled, but it was still standing.”

“I think whatever inherent strength it had, it kept the bulk of whatever force that was hitting it off of our doctor and our patient. We’re really grateful for that.”

The avalanche destroyed the medical shelter, but WeatherPort is stepping up to donate a new facility to the Himalayan Rescue Association.

“Of course the tent is the biggest ticket item and obviously absolutely necessary to continue,” Dr. Freer said. “When I got a call from (WeatherPort), it was just really like basically saying, ‘We want to support you. We want to get you what you need.’ I think when I called our board and said we had this offer and we could get our tent refurbished or replaced, it really kind of got us back in the saddle. We’re very, very grateful.”

The new building will feature a partition to create a forward compartment for simple medical examinations and treatments. The rear section of the structure will be used for more serious medical emergencies and as a secure area in which to store valuable equipment and medically necessary prescription drugs.

As with the previous Everest ER building, the new WeatherPort structure will be designed for extreme mobility in Nepal’s rugged environment. The shelter system will be transported from Nepal’s capital of Kathmandu to Mount Everest by porters and yaks. It will be assembled on-site at the beginning of every climbing season. Once the season is complete, the group will disassemble the structure and return it to storage until the next climbing season.